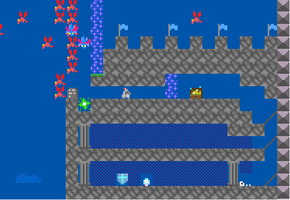 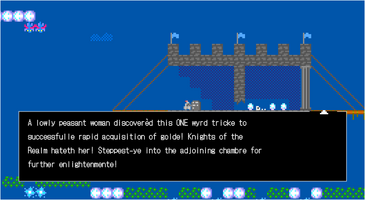 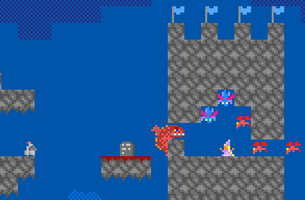 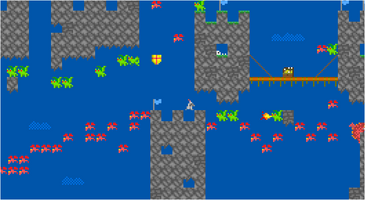 No updates to report for All Right on the Knight, but users of the tool in which the game was made, Pocket Platformer, may have noticed several innovations and updates in the meantime, including teleporters, collectibles, and more sprites to work with. Fun stuff! But also, an update has been added to the solid blocks that can be switched on and off (implemented in ARotK as blue or green stars that solidify into blue or green blocks when switched): Whereas being trapped "inside" these blocks would normally propel the player to the left - very handy considering the main "purpose" of the game - Pocket Platformer now causes an insta-kill when these blocks solidify over any space that the player character occupies. No more speeding off to the left.

Although this is probably for the best, considering the inconsistency and exploitability of being trapped inside a solid wall as demonstrated in ARotK, it also means that one wouldn't be able to use that as a feature in later games made in Pocket Platformer (without a little HTML-hacking, at least). However, with the introduction of teleporters that can instantly send you to anywhere else in the level, pushing a character from right to left after they travel to the right as far as possible is still easily done.

So while there may never be another Pocket Platformer game with all the same mechanics as this one, PP promises a variety of even better mechanics and many new possbilities for game-making. Onward!

All Right on the Knight

Seekest thy fortune, vanquisheth the dragons, and becomest a knight moste legendary!